There were many earthquake and tsunami-related solutions put into place in Japan both as precautions and direct consequences of the natural disasters.

Japan and the areas bordering the Pacific plate, such as San Francisco, California, are prone to earthquakes and related subterranean activity. As a result, in Japan, many buildings in urban areas are generally "earthquake-proof", that is, resistant to the effects of an earthquake. There are a huge number of methods to "earthquake-proof" buildings.

One inventive method by Japanese inventor Soichi Sakamoto and the Air Danshin company has the house sit during normal times, on a deflated air bag. When sensors feel a tremor, they switch on a compressor which pumps air into an airbag, inflating it and lifting the entire house up to three centimeters off its earthquake-proof concrete foundation. There the structure will hover for the duration of the quake. When the quake subsides, the house settled back down onto the foundation and the airbag is compressed again.[1]The Air Danshin method will take care of smaller earthquakes. An experiment had the home equipped with mannequins, furniture and drinks. During the "tremor", not one drop of wine was spilt, and the residents were undisturbed.[1] However, the system only works for lateral quakes. Most earthquakes are not restricted to a two-dimensional plane and many rise above three centimetres.[1] There is a possibility of the house being directly shaken off its foundation. The Air Danshin system also relies on an earthquake having a large jolt at the very end, which, combined with the lateral and three-centimetre restrictions, make it unlikely to completely save the house fro destruction. However, as 88 houses are being fitted with the technology in Japan, the practical experiments will hopefully help advance the technology.

Anti-earthquake infrastructure has expanded to other areas, including transportation. For example, Japan's high-speed Shinkansen railway trains feature the UrEDAS system — which detects an earthquake’s small seismic waves prior to the arrival of larger waves and automatically cuts the power to bring trains to a stop.[2]

A diagram of how the Air Danshin system works. 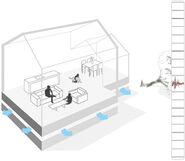 There is a level of air separating the house and foundation.
Add a photo to this gallery

During the tsunami, the tsunami defensive walls were easily overpowered. Taro’s anti-tsunami defensive wall stretched 1.5 miles across the bay and was comprised of two layers, an inner wall that was reinforced by an outer wall. The tsunami breached the outer wall within minutes and quickly surged over the thirty-four foot high inner wall and swept away most of Taro.[4] However, the nearby city of Kamaishi, the damage was only "limited" when compared to other cities, as according to Shoichi Sasaki. This was because it had the world's deepest breakwater, at 207 feet, and high seawalls and extra facilities.[4][5] Although sea walls and breakwaters helped to hinder the tsunami, they did not prevent overall damage - many failed to protect towns and cities and were damaged in the process.[6] Also, building sea walls for towns along the eastern seaboard would be expensive and time-consuming. As Japan is prone to seismic activity, these sea walls would potentially have to cope with earthquakes and frequent tsunamis, therefore requiring specialised maintenance efforts.

Building construction can play a key part in whether it'll survive a tsunami or not. The ways in which one can improve how resistant their residence is to a tsunami are as follows:

These methods are perfectly, valid, but may conflict with anti-earthquake measures. for example, timber houses are popular due to their resistance to earthquakes, but are horrible for weathering a tsunami.[7]

The Fukushima Power plant faced the sea. The power plant complex had a sea wall to protect from waves. The sea wall was originally a 35-metre-high cliff but TEPCO (Tokyo Electric Power Company, Incorporated) had the wall reduced to 10 metres.[8] However, during the 2011 tsunami, the sea wall proved to be too low and failed to prevent a nuclear meltdown when the tsunami damaged reactors at the plant. If the wall had not been reduced in size, it would have been able to lessen the impact of the tsunami on the Fukushima Daiichi plant. Due to this, the Japanese Government is now investing 8 billion yen in "supersized" sea walls 17-foot high spanning 230 miles. Critics have criticized this decision, claiming it both too be overly costly and would cut off Japan from its seashore, likening it to a prison.[3]

Waves engulf the sea wall at the Fukushima Plant

A bird's-eye view of the sea wall

The sea wall was originally 35 metres, but was cut down to 10 by TEPCO
Add a photo to this gallery 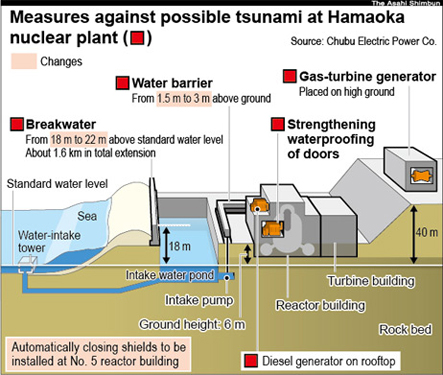 Fumihiko Imamura, a professor at Tohoku University’s Disaster Control Research Centre, claims that moving towns further inland is also an option.[9] Although moving towns inland would reduce damage and casualties, damage has been done to inland prefectures (such as Saitama) as well as coastal ones. Additionally, due to Japan's nature as an island chain and large urban populations (such as the coastal Tokyo-Yokohama conglomerate), coastal cities are an inevitablility. The cost would also obviously be massive, additionally, tourism on beaches is strong in Japan.[10]

Removing nuclear power from Japan is also an option to prevent disasters such as the Fukushima Nuclear Disaster from happening again. Indeed, there is a strong anti-nuclear sentiment and movement in Japan; 40,000 protesters marched in Tokyo on March 10, 2013 calling on the government to reject nuclear power.[11]

In a public poll, it was found that 70% of Japanese surveyed wanted nuclear power reduced or eliminated. It also found 80% distrustful of the government's ability to properly manage nuclear safety and environmental concerns.[12] However, though anti-nuclear sentiment is strong, with the correct precautions and provision of information to the public, nuclear power can be a cleaner and more efficient power source. It is however, unclear of exactly how the government will dispose of nuclear waste.[13]

Better scientific research on earthquakes and tsunamis, especially within the Japanese region, is vitally necessary to prevent future disasters. Simulating earthquakes and tsunamis is an important tool for preparing  for future tsunamis, as they give scientists a virtual environment where different methods can be tested, and simulation technology has greatly improved in the last few decades. Although, tsunami propagation and maximum tsunami height can be estimated with good accuracy up to the shoreline, afterwards the simulation may not be realistic. Additionally due to the infinite number of variables the impact of the actual earthquake or tsunami may be very different from what has been simulated.[14] The research of several organisations have helped Japanese scientists better understand earthquakes and tsunamis. These organisations include Tohoku University[14] and the Tsunami Research Center, though the latter is based in the United States.[15]Scientific research is a great way to improve natural disaster awareness and helps scientists understand them to better prevent and save lives. Japan needs to continue to spend money on research, as well as better warning systems. As simulation technology continues to improve so does the realism involved, which allows scientists to test out scenarios and act on them as if they were a real tsunami.

The earthquake warning system automatically issued alerts via television and cell phones shortly after the first, less harmful, shock wave was detected, providing time for many people to prepare for the more powerful shock wave that followed. It also caused many energy and industrial facilities, and transportation services to shut down by themselves. A string of detection buoys in the Pacific Ocean detected the tsunami that resulted from the earthquake, sending warnings of possible catastrophe to many different nations. Japan is continuing to invest in these systems, in the hope that, with better communication, more lives can be saved in the future.[16]

Japan is now spending millions of (U.S.) dollars on an improved network of ocean bottom sensors and tidal gauges to better estimate when earthquakes or tsunamis will next strike.[17] They are also developing a better warning system, which is necessary after government reports found that lives were lost due to people missing both the initial warning and the later, revised follow-up warnings.[17]Warning systems are obviously a vital part to help prevent excessive damage from earthquakes and tsunamis. They help alert the general public to the disaster before it actually happens, saving hundreds of lives and keeps everyone informed and orderly. This is because as the public knows what is happening, and is clearly instructed on what to do, they are less likely to panic or make poor decisions. 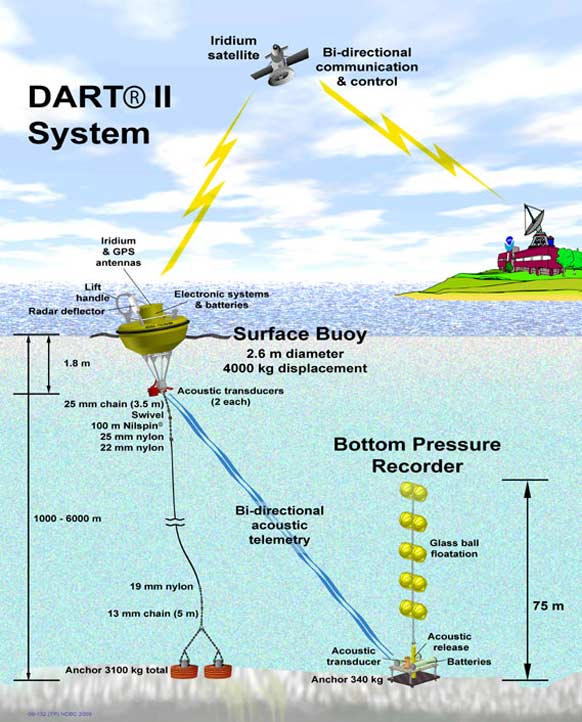 A real-time video of seismic sensors

The Reference list page contains a complete list of references used on this wiki, as opposed to just this page.
Retrieved from "https://2011teas.fandom.com/wiki/Solutions?oldid=4969"
Community content is available under CC-BY-SA unless otherwise noted.