The Impact of the 2011 Tōhoku Earthquake and Tsunami was vast. A direct impact of the earthquake was a tsunami that affected the eastern coast of Japan. Another subsequent impact was the Fukushima Nuclear Disaster. According to Japanese Prime Minister Naoto Kan, "in the 65 years after the end of World War II, this is the toughest and the most difficult crisis for Japan".[1]

The main article for this section is Earthquake

The earthquake caused the tsunami, which was the third mega earthquake-generated tsunami in the decade, following the Sumatra tsunami and the Chile tsunami.[3] The tsunami in-turn caused the Fukushima Nuclear Disaster. Aside from the direct damage caused to buildings and infrastructure, the earthquake indirectly caused the damage described below.

Aside from the tsunami, the earthquake had 10907 aftershocks, most of which contributed to the destruction and damage of buildings and infrastructure.[4]

The main article for this section is Tsunami

Soon after the 2011 earthquake off the coast of the Tōhoku region, a large tsunami wreaked havoc on the eastern coast of Japan. The waves of the tsunami reached as afar as Alaska and Chile (a Japanese motorcycle washed up on the shores of British Columbia province, Canada), though did more damage closer to home. In Myako, the waves reached an estimated hegith of 38.9 metres. The Japanese Meteorology Agency rated the tsunami "major" on its rating scale, with waves generally reaching 6 metres high. The tsunami took place at 2:46 pm JST. The tsunami flooded vast areas, particularly in the Miyagi Prefecture, notably Sendai airport.

The main article for this section is Fukushima Nuclear Disaster

A direct result of the tsunami was the meltdown of the Fukushima I nuclear power plant. Four out of six damaged reactors began to emit radioactive materials due to damage from the tsunami. The accident soon became the most severe disaster since the meltdown of the Chernobyl plant in the former USSR, in 1986, and the only one to tie with Chernobly for a level 7 disaster on the International Nuclear Event Scale (INES). Though the ramifications of the radioactive materials emission affected international relations, the situation is under the full control of the Japanese government. Crown Prince Naruhito and Crown Princess Masako visited Sendai and the nearby area to witness the recovery of the region.

As a result of the earthquake, the parts of northeastern Honshu shifted 2.4 metres towards North America, widening Japan at some points. The axis of the Earth was also shifted by a distance ranging from 10 to 25 cm. The speed of the Earth's rotation increased, and the length of day decreased by 1.8 milliseconds.[5] 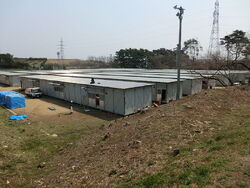 The earthquake and tsunami displaced many people from their homes. The number of people displaced numbered up to 400,000.[13] Three years onward, 267,000 people are still living in temporary housing.[9] A further 97,000 were displaced by the Fukushima Nuclear Disaster.[9] Many of this temporary housing are without bare living necessities such as inadequate food, water, including drinking water and sanitaiton, and hospitals were overwhelmed, running sort of medicine and supplies.[14]

It is possible that the reluctance of the government to let evacuees displaced by the Fukushima Daiichi disaster return to their homes contributed to approximatley 1000 more deaths, due to poor conditions amplified by the extended evacuation.

The environmental consequences of the triple disasters is estimated to be vast. Mostly due to the Fukushima Nuclear Disaster, such toxic chemicals and compounds such as acrylamide, asbestos, benzene, bisphenol A, bromomethane (methyl bromide), cadmium, chromium compounds, chloroform, chlorodifluoromethane, ethylene glycol, dioxins, formaldehyde, lead, mercury, toluene, and xylene have leaked into the surrounding ecosystem. The oceans and marine environments have suffered heavy pollution. Meanwhile, the agricultural sector in Japan has suffered large setbacks as radiation has rendered many livestock, such as cattle (beef) and their milk unfit for human consumption.[15]

One of the catastrophic consequences of Fukushima disaster is radiation exposure, which can cause medical diseases, including cancer (for example thyroid gland and leukemia) and genetic problems, having long-term effects on human health. For example, in the Hiroshima and Nagasaki atomic bombings, the number of leukemia cases started to increase among bombing survivors two years after the bombs were dropped. Particular attention has been paid to the health of children following the disaster. The Fukushima prefectural government has developed a program to monitor the health of all residents in the prefecture, who number about 2 million, throughout their lifetime.[15]

On 12 March 2011, after the earthquake and tsunami in the northeast Japan, Japanese then-Prime Minister Kan flew in a helicopter to observe the Fukushima Power Plant and was heavily involved in efforts to effectively respond to the recent disasters. He took an increasingly anti-nuclear stance, and vowed to reduce Japan's dependence on nuclear power.[16] Despite these efforts, his popularity with the Japanese public fell greatly due to his perceived lack of leadership following the disaster. He later announced his resignation on 2 June 2011 amid widespread criticism of his handling of the aftermath of Earthquake, Tsunami and Nuclear Disaster.[17]

Impact of the Fukushima Nuclear Disaster

The main article for this section is Fukushima Nuclear Disaster

Impact on the Prefectures of Japan

The main article for this section is Prefectures of Japan

The Reference list page contains a complete list of references used on this wiki, as opposed to just this page.
Retrieved from "https://2011teas.fandom.com/wiki/Impact?oldid=4995"
Community content is available under CC-BY-SA unless otherwise noted.